After next Tuesday I will have completed my internship with The Nature Conservancy. Most of my internship revolved around setting up the Washington Coast Works: Sustainable Small Business Competition boot camp in Forks, Washington. My job was to plan a four-day intensive business training – and it went off without a hitch.

In regards to my learning objectives I think I was fairly successful. My goals for the summer related to fully understanding the organizations that I am with, as well as successfully planning the boot camp. I had a lot of practice with computer programs in order to create documents for the weekend, as well as to give the participants access to a series of materials. I planned the days and organized the conference center to suit everyone’s’ needs. Before the boot camp I also had the chance to meet everyone in the Nature Conservancy office in Seattle, and next Tuesday I will be presenting to them about the progress of the project and my internship.

After my work this summer I have a better idea of how I would like to direct my studies, as well as what I might like to be doing after school. I want to take a larger environmental focus to my learning, instead of just in my extracurriculars. After school I’d like to work with small businesses in South America because now I have a better idea of how to develop sustainable small businesses.

The Nature Conservancy was a fantastic place to work with and I hope others want to intern with them as well. I’ve talked with my supervisor about possibly continuing to work with them. My only advice is to keep a good attitude and to work hard. I worked extremely hard, and my supervisors definitely took notice.

I don’t know if my ideas of social justice have been challenged, but I’ve definitely had a chance to think more about them. This is primarily due to one of the participants in the competition, Jean. Jean is from Queets Village which is part of the Quinault Indian Nation. During the competition Jean spoke about the 95% unemployment rate in her village, as well as the fact that they lack a zip code. I never had thought about how difficult it might be to start a business when you don’t even have a zip code. She spoke about the difficulties of being recognized, and I have to agree with her. The tribes in Washington are such a crucial part of our history, but it seems like the government tries to forget about them. I’m definitely glad that my project focused on Native communities. 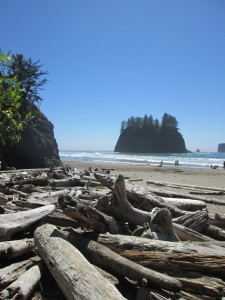 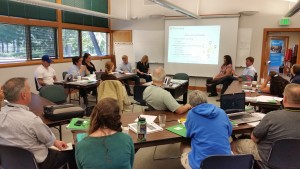 One of the panels that we hosted during the boot camp 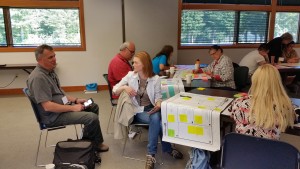 My boss, Mike Skinner, chatting with one of the participants about planning her composting business 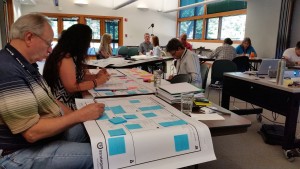 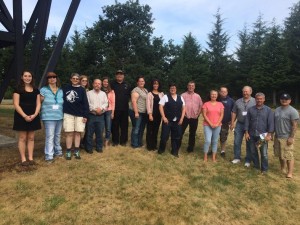 Most of the participants as well as my supervisors

Hi! I’m about a month into my internship with the Nature Conservancy and have about a month left to go. Most of my work up to this point has revolved around preparing for the Washington coast Works Sustainable Small Business Competition boot camp that will take place at the end of this month. I’ve been doing a lot of the coordinating with the conference center that we will be at as well as making sure the materials are available to the participants.

First off, I am definitely working on all of my learning objectives. I have learned a lot about coordinating and planning events, as well as making sure all the little details are taken care of. I have been engaging with the other people in my office, as well as my internship supervisor. Two of my learning objectives will take place during the boot camp because I’ll be listening in to all the information about creating sustainable small businesses and learning more about environmental organizations. For all of these things I am monitoring my growth through a workplan that my boss and I created that lists all the tasks that we have accomplished, as well as everything that has yet to be done.

Right now I am most proud of learning how to do all these tasks on my own. I feel like I have grown a lot through my internship and think that a lot of the skills that I have learned will carry on to future jobs. I also am excited for the boot camp because there I will have the opportunity to learn a lot more about small businesses.

All of the skills that I am learning will be transferable. First, after the boot camp I will have learned a lot that can be applied to the things that I learn in economics. I hope to write some sort of paper at some point about the positive effects of creating small local businesses in rural communities as opposed to big industries. I also am gaining more information of where I’d like to be in the future. I picked two broad degrees of study in order to give myself as many options as possible. I would like to continue to work with rural communities in an economics sense.

I’ve also added some photos of the building that I work in. 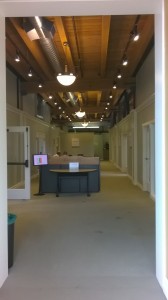 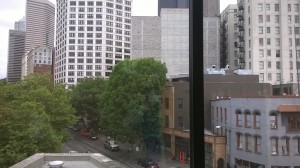 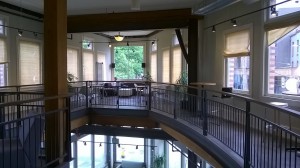 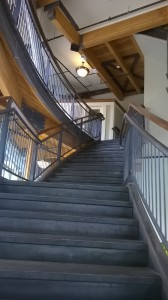 I’ve had a great last week at my internship, so I can’t wait to see what will come next! For this specific project that I am working on, called Washington Coast Works, I’m actually doing the majority of my work at the Pinchot office in downtown Seattle. At Pinchot there is the Center for Inclusive Entrepreneurship (CIE), a program that provides entrepreneurship and enterprise support to people in underserved communities. Because CIE specializes in something very similar to what the Nature Conservancy (TNC) project is working for, TNC provides the funding and support to CIE to head the Washington Coast Works project. I hope that all made sense!

Anyways, I’m mainly working at the Pinchot office downtown where I’m primarily working with just one guy, Mike, who has been putting so much time and energy into this project. Because Mike has been doing so much of the project on his own so far, he is very appreciate of the help.

For this first week Mike has just been giving me a full rundown of the project so far. I read the entire USDA grant proposal that he had submitted to gain money to fund the project, as well as all of the applications that have been submitted from people who have ideas for businesses. There are a lot of other forms and files that I’ve been reading as well, in order to familiarize myself with the entire project. It’s all super interesting! Our next steps are to choose the ten participants and two alternates for the competition.

I had a great first impression of the job! Although I’m not really working much with anyone else in the office, they have all been very welcoming and helpful. The whole building is a really interesting space and ideas kind of just flow freely between the organizations that are housed in it. I’ll definitely try to take more pictures.

I’ve learned a ton so far as well. I think that through this internship I’ll learn a lot about small business start-ups, as well as sustainability in businesses. What’s amazing about this internship is that because I’m only working with a few people I actually have some sort of a say – something that I didn’t expect. Before I arrived Mike and Eric, the partner at TNC, had drafted up a list of participants for the competition. I disagreed with two of those that they had chosen, and they actually switched them out with the ones that I had supported.

I’m excited to see how the rest of the internship goes after a great first week!

When I return from traveling this summer I’ll be interning at the Nature Conservancy (TNC) in Washington. TNC is a non-profit organization that works all over the world with the mission “to conserve the lands and waters on which all life depends”. The organization does all sorts of conservation work in order to protect our planet. This summer TNC is launching a competition called “Washington Coast Works” in order to diversify coastal economies through developing small businesses and ultimately boost economic development and sustainable communities on the coast.

My internship this summer will revolve around working with this competition and helping to connect the business and environmental aspects of the project. I’ll be working with one of the leaders at TNC, as well as someone at the Pinochet Center for Inclusive Entrepreneurship. I think that it will be great working on this specific project because I’ll get to work with it from the beginning to the end.

I found and secured the internship by emailing a woman at the Nature Conservancy that my dad has worked closely with in the past. She connected me to Eric Devlin who was the one who secured me the internship. I found that I had more success with my internship hunt when I directly contacted people, rather than just applied for ones that I found online.

I hope to gain a lot of work experience through the internship this summer. I work two jobs right now, and I’ve had jobs in the past, but this will be by far the most professional work that I’ve ever had experience with. I think that I’ll learn a lot by working with such a big organization, and by seeing how a project is put together. It will be interesting to work with people in a more formal way than what I’m usually used to as well.