This summer, I’ll be working on Senator Mark Warner’s re-election campaign. I’m an intern with the field staff, so I work on campaign events and voter outreach. I work primarily in the Richmond office, but I’m the intern for the Northern Neck which is a more rural area of Virginia closer to where I live.

This post is summing up a little more than a week for me. I actually started my internship on May 19th, but that week was spent in a transitional state because the field organizers had not yet been hired and the campaign’s “kick off” tour was scheduled for the following week. I primarily worked on reaching out to voters and inviting them to events. Unfortunately, I had to miss the kick off events due to a family emergency, but I was excited to get back to work this week. 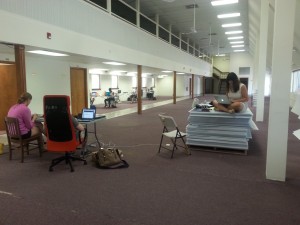 The campaign staff working in the newly squirrel-free office!

Today, I got to meet the field organizer responsible for the Northern Neck who will be my boss for the rest of the summer. I’m really excited to work with him on planning events in my area and getting voters enthusiastic about Senator Warner’s campaign. This summer, I really hope to learn the intricacies of planning campaign events and maybe even plan my own event. I also want to learn more about a career in politics and how the members of Senator Warner’s campaign staff came to be in their current positions. No matter what, I think my summer with the campaign will be an interesting experience.