Although we have not yet worked on writing lab reports , for they are not written until the end of a given project(which could take years), I have been training and practicing to interpret my findings each day. This entails both an understanding of the underlying principles behind the experimental procedures I am performing, and more importantly, development of my ability to troubleshoot. Troubleshooting is a vital skill in the world of lab science. It involves encountering an error of some sort, and knowing the assortment of possible reasons that could have caused my data to show results in contention with my hypothesis. At which point the next step is to compile a list of potential reasons for this discrepancy.

The first set of possibilities might require looking at possible problems with each individual step in the procedure. It is essential to alter as few steps as possible per each trial of the procedure. This helps to specify exactly what change causes the resulting effect. One such instance might include changing the ratio of a reagent used. During immunohistochemistry, for example, the brain sections I was staining for the presence of tyrosine hydroxylase(TH) and vesicular glutamate transporter 2(vglut2) were demonstrating an oversaturation of magenta (the color which was supposed to indicate the presence of vglut2), so that this color almost entirely masked all others that should have been seen. I resolved this problem by lowering the ratio of the primary antibody raised against vglut2 from 1:400 to 1:500, which caused less non specific staining.

If my problem had not been solved, then I would have needed to take note of such, and either revert my change in the protocol to be used for future attempts at the procedure(if it had made the problem worse) or keep it in the protocol(if it improved the result slightly) and add another change to a different part of the procedure to further improve my results. If no changes successfully result in the product I need, then it may become time to change my hypothesis. This is the scientific process, essentially educated trial and error until results are seen.

I have also found that utilizing a concept that I picked up in a philosophy class at Tulane will greatly assist me in coming up with my own research plans in the future. A model described to me, known as top-down thinking, calls for starting with the broadest, most general parts of an idea and narrowing your plan down at each level of thought, wherein the uppermost three tiers in the proposed model should be the most expansive in scope, and therefore the most well thought out. If one of these upper level parts of the hypothesis are wrong, it could mean starting my project from scratch with a completely new idea. Whereas a mistake in the lower tiers is not quite so devastating, and will require only minor changes to minute details of the procedure. This can be done relatively easily, without an overwhelmingly negative effect on the project as a whole.

At this point in my internship, I am most proud of the level of independence that I have attained while working in the lab. I have begun to feel comfortable enough with various procedures to the point where I make small changes to various aspects of the protocol in order to optimize potential results. Now, on most days, my mentor does not need to instruct me on what to do or on how to do it(but is of course still always available to answer any questions I might have). By giving me a broad overall goal to achieve, my mentor has allowed me to develop and implement my own style of achieving it. Although I have been getting familiar with a few different procedures and techniques, it has become apparent that it is very significant to understand how any specific task, that I or another lab member performs, relates to the larger picture of the project as a whole. Learning about the interconnections of the many aspects of the project, each performed by a different member of the lab, allows me to better understand the methods of a professional researcher in this field so as to maximize potential quality of the results while emphasizing their relevancy to the scientific community and to society as a whole.

I have also begun practicing the skill of finding and utilizing the results of previously published data and papers. This is integral for formulating research plans, as it allows the experimenter to build upon the findings of other scientists, both contemporaries who research similar areas and more historic scientists whose works serve as the foundation for modern science.

Another skill I have been developing is proper use of the confocal microscope. Not the ordinary piece of equipment that can be found in any lab or classroom, the laser scanning confocal microscope is a powerful machine that allows the up-close viewing of fluorescently labeled mouse brain sections. It produces such a highly magnified view that the user can actually see each individual neuron on the brain slice and what type of neurotransmitter that cell fires. This is where the staining from immunohistochemistry comes into play. Having sectioned a mouse brain on a vibratome into slices 3 microns thick, I would then perform their staining using immunohistochemistry (a procedure that takes advantage of the biologically natural system of antibodies to allow selective labeling). Once having stained for the selected targets (in my case: TH and VGLUT2 in the VTA), I take the brain slice, which I have since mounted in a glass slide, and analyze it under the confocal microscope. I have included a picture of a brain slice that I personally sectioned, stained, and analyzed under the microscope.

In the pictures: red indicates tyrosine hydroxylase(TH) which signifies a dopaminergic neuron, blue is indicative of DAPI which binds to all cellular nuclei (so that a blue dot surrounded by red proves that there is a neuron producing dopamine and that the red is not just free floating dopamine), the magenta highlights vesicular glutamate transporter 2(VGLUT2) which signifies the presence of glutamate(wherein the blue dot within magenta indicates a glutamate projecting neuron) 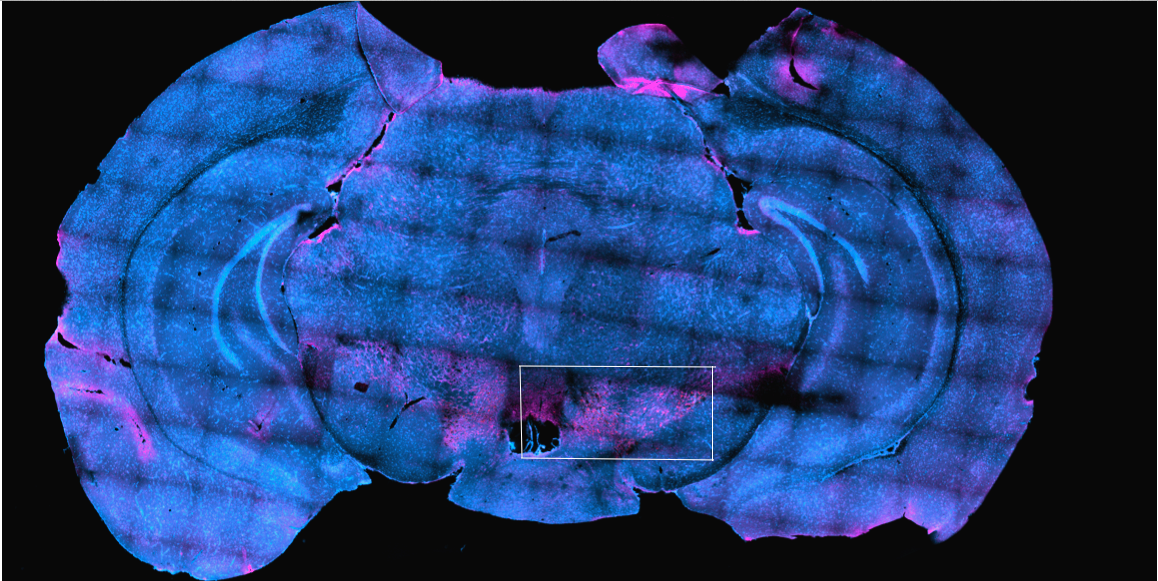