My final weeks at The Family Institute were the perfect culmination of a summer’s hard work. Ironically, I actually miss my once dreaded daily commute to and from Evanston in Chicago rush-hour traffic. Even more, I miss the work I was doing, the knowledge I was attaining, and the people I had the pleasure to work with.

During my final two weeks at The Family Institute, I was able to attend a graduate level course in marriage and family therapy, presented my literature review on the impacts of parental war deployment on child outcomes, began work on an independent project regarding how spousal communication style impacts war-time resiliency, and celebrated the summer’s accomplishments through a farewell ceremony.

The Family Institute offers graduate programs in Counseling Psychology as well as Marital and Family Therapy. I was lucky to attend a second-level marriage and family therapy course about group therapy. Specifically, the instructor addressed how to be an effective group therapist and run a group therapy session efficiently. The experience was interesting not only for the subject matter, but also helped me delineate my own career aspirations. I garnered a greater understanding for the populations marital and family therapists often serve, and the presenting problems of these clients. I left the course confident in my desire to pursue a Ph.D. in clinical psychology.

As mentioned above, I also began formulating my own independent research project based upon literature I read while conducting my assigned literature review. Fortunately, my mentor at The Family Institute, Dr. Knobloch-Fedders, agreed to work with me from a distance. Therefore, I will be conducting research analysis at Tulane during my junior year, using data that was originally collected and stored back in Evanston. My project is on the impact of parental communication style on resiliency. In particular, whether the way in which spousal reports of communication can be a predictive factor in PTSD diagnosis. My goal is to present any significant findings on a poster at a psychology conference of my choosing in the coming year.

My final day in Evanston comprised of sharing memories from a great summer. As each intern shared his or her favorite experiences, I fully realized my gratitude for the wonderful opportunity I was presented with. I know The Family Institute will always be a home to me, and I look forward to my next psychological adventure! 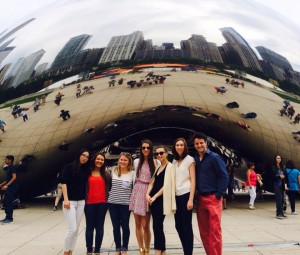 As the end of my summer internship experience at The Family Institute quickly approaches, I’m overcome with the realization that time passes so quickly, and I must stop and enjoy each remaining bit of my time remaining in Evanston before this incredible opportunity becomes only a memory. Since my last post in which I outlined my initial impressions of The Family Institute and my first tasks, I have become incredibly close with my fellow interns, worked continuously on an independent literature review research project, and made progress in the Depression, Anxiety, and Couples project to which I’m assigned. I have also heard from numerous professionals currently working in psychology fields, allowing me to develop into a more knowledgeable and confident individual in my personal career aspirations. Specifically, I have become more certain that I see myself being a practicing clinician—helping others with the difficulties of psychopathology through therapy sessions, while also conducting corresponding psychological research on the side when I see fit. Finally, I have begun formulating an independent research project under the supervision of my mentor, Dr. Lynne Knobloch-Fedders, which I hope will allow me to continue work and a connection between The Family Institute and myself even after my departure in August.

My lab work over the past several weeks as been comprised mainly of statistical analysis of the interpersonal relationships between a subset of couples who were recruited for the Depression, Anxiety, and Couples Project. The other interns and myself work with a specific sample of couples with which on partner was diagnosed with PTSD from recent wartime experience. I have learned how to compute several statistical values such as frequency values and inter-rater reliability statistics, which will all be used to create a working model of the communication patterns between partners from this population of “PTSD couples”. We hope that by garnering a greater understanding of how these partners communicate with one another (i.e. how particular forms of communication are either detrimental or beneficial to the functioning relationship), psychologists may develop better models for intervention and improving lifetime outcomes in the face of adversity. From my experience, I feel much more knowledgeable about the functioning of the software used for psychological research (i.e. excel and SPSS statistical software), and better able to understand numerical information generated from these systems.

Outside of this lab work, each intern has been conducting research and composing a literature review on a related topic to PTSD or the psychology of related wartime topics. Personally, my literature review concerns the impacts of parental war deployment on child outcomes. While the findings are disheartening, Dr. Knobloch-Fedders hopes that future research projects my be formulated from our findings and discovery of current gaps in the literature.

While I know I have benefited intellectually from the work I have conducted, I am also incredibly grateful for the personal connections The Family Institute has allowed me to foster. While working with the other students each day in close quarters, we have become comfortable with one another, and a large aspect of going to work each day is having the ability to converse and relate to one another. Earlier in July, our group was able to venture into downtown to Chicago, to see The Family Institute’s Millennium Park location, but also enjoy each other’s company in a unique setting. I left that particular day feeling fortunate for the new friendships I have been able to create, and I know we will remain in touch with one another as we continue on which our own pursuits. It’s comforting to know we each have a group of supporters and connections within our chosen field!

I will be sure to write again after I have completed my internship, and I also hope to post pictures soon! Thanks for reading!

With my first week completed at The Family Institute at Northwestern University, I step back to reflect upon my experience thus far. With the exception of a lengthy, traffic-packed commute, I now realize that I could not have been blessed with a better position, institution to work for, and co-workers with whom to share the experience. I am more excited than ever for the next seven weeks, and to soak in all the knowledge and adventure I can during my short stay in Evanston!

Overall, The Family Institute is a counseling and therapy center determined to help families through clinical service, research, and education. The Institute believes that the family is an important factor influencing all individuals, and thus treatment and counseling services should always include the familial system. The specific project on which I work is entitled the Depression, Anxiety, and Couples project. My mentor and the principal investigator of the project, Dr. Lynne Knobloch-Fedders, Ph.D., proposes the study of interpersonal interactions of couples in which one partner suffers from anxiety or depression in attempts to produce improved assessment and intervention models. Thus, my work this summer will include analysis of interpersonal interactions between a sample of these aforementioned couples.

My first day on the job was Monday June 9th, during which I and my fellow interns became acquainted with one another, the mission of The Family Institute, Northwestern’s campus, and our individual projects and responsibilities. Our orientation day began with ice-breaker activities allowing me to mingle with the other five students assigned to my project, as well as two other students working on another assignment. I was blown away to learn about the diversity of backgrounds, interests, and skills of the other students. Each one of us came from a different home university, all scattered around the United States. I am intrigued to investigate the multidisciplinary viewpoints and perspectives of my team throughout the next several weeks! Halfway through the day, The Institute provided a lunch for the interns, and also invited working counselors to come chat with us. The president of the institute even dropped in to welcome us to the team! The day concluded with a tour of Northwestern’s Evanston campus. We investigated the Norris Student Center, the Library, and even received Northwestern “Wildcards” to allow us access into certain academic buildings throughout the summer. I was amazed at the beauty of the campus, sitting right on the shore of Lake Michigan!

The real work began on the second day, beginning with training of video transcription. Throughout the day, I learned how to transcribe a sample couple’s interaction–including both verbal and nonverbal cues. I was taken aback at how lengthy the process of transcribing can be–it took me nearly seven hours to transcribe two, six-minute videos! I continued my transcribing assignments into Wednesday. Also, my schedule on Wednesday included an hour discussion with Dr. Lynne Knobloch-Fedders, about her own educational and career trajectory. I learned much about the process of applying for graduate school in clinical psychology, which I know will surely be of use in the future. Thursday included an organized lunch in downtown Evanston for all of the interns, and it was refreshing to be able to converse with the other students outside of a work environment. I’m hoping to build strong relationships with each and every one of them! Thursday afternoon I was trained in SASB coding–a particular coding system used to code the interpersonal conversations I had already learned how to transcribe. Finally, Friday concluded the week with Kappa training, and the entire day I was trained in how to compute the statistic Kappa–a value used to describe inter-rater reliability between two distinct SASB coders after they have completed the coding process.

I could not have fathomed a better internship for the Summer 2014. It’s difficult to think that the internship search process I began in December of 2013 has culminated in the experience of a lifetime. Although I can tell the work will be challenging, I am excited to grow personally and intellectually throughout the process. I look forward to the memories and knowledge to come, and I will be sure to update everyone on my latest advancements!