My internship with the New York Mets has come to an end — and if there’s one thing I can’t say enough about the experience, it’s that there’s nothing like working in a baseball stadium. Walking the empty concourses of a stadium on a non-gameday is a truly special feeling — even if you’re not a sports fan.

Interning in the Ticket Office was an eye-opening experience, and provided me with an unbelievable opportunity to work in the sports industry. From mailing tickets, preparing ticket exchanges, updating the sales board, learning how to use ticketing computer programs, inputting information in spreadsheets, delivering gift packages to suites, organizing/managing in-stadium events, etc., the work was always different and I always had to be prepared to do the unexpected. The work was incredibly fun, challenging and exciting — and though working in the sports industry means long hours, few free weekends and tons of baseball, it was absolutely worth it.

I worked with incredibly dedicated people along the way who really served as great role models for me, as they each showed me the kind of heart and effort that must be put into working in the sports industry. I’ve been unbelievably fortunate to have had the opportunity to intern for the New York Mets and learn from my mentors, and it’s an experience that I treasure and will never forget.

I just wrapped up a very busy July 4th weekend of work, and I’m about to begin a seven game homestand starting tomorrow….but I’m ready to go and I’ve got tons to write about!

Working in the sports industry is similar in many ways to playing a sport, in that it is impossible to predict. I’ve been interning in the New York Mets ticket office for more than 6 weeks now, and every day I’m presented with something new and unique. Whether it be paperwork, gameday responsibilities, etc., the work is always different and I always have to be prepared to do the unexpected. 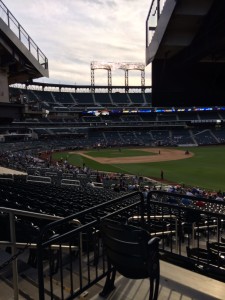 Recently, I was involved in the organization and management of a Match.com “Singles Mingle” event at the stadium during a game. My responsibilities included working with Match.com to set up the event and make sure everything ran smoothly. It doesn’t sound like the typical “ticket office work,” but as I said, one must always be prepared to do the unexpected when working in the ticket office!

July 4th weekend was, of course, very busy and the days were long, but there was no better way to spend it than at the ballpark! The Mets begin a seven game homestand Monday, and though I can’t predict what work/events will be coming my way….I’m ready for anything!

I’ve just wrapped up my first week interning with the New York Mets, and all I can say is that there’s nothing like working in a baseball stadium.

I arrived at Citi Field on my first day at 10 a.m. for an intern orientation. The Mets had an off-day, so things were quiet around the stadium, and I walked through the empty and dark concourse toward the offices in right field. It’s a very weird feeling to walk alone through a stadium that seats 45,000 people. During this orientation, I learned general information about the Mets’ Front Office, the role and responsibilities of interns, proper etiquette/behavior, etc. I, along with the 11 other interns, was then given a tour of the facility (the stadium and the offices/work space), and later placed with my department — Ticket Office.

The Mets began a 9-game homestand on my second day, and I was put to work immediately. When I arrived at 9 am, things were already very busy around the stadium, as everybody rushed to prepare the stadium for the Mets’ 7:05 p.m. game against the Los Angeles Dodgers. My first work included mailing tickets, preparing ticket exchanges, updating the sales board, learning how to use ticketing computer programs, inputting information in spreadsheets, etc. Prior to the game, I received my meal card, and immediately went to town on a Shake Shack burger. The concession stands at Citi Field are top-notch.

I had initially thought that once the game began I would pretty much watch the whole thing, as I am a huge baseball fan. But during the game, I was so busy delivering gift packages to suites, and season ticket holders and group ticket holders in their seats, that I didn’t watch the game at all. Still, it was incredible to work inside the stadium while a game occurred. Though the Mets are….struggling, the crowd was loud and full of energy, and it made the work environment laid back and stress free.

As the week went, I gained some new game day responsibilities/work and projects, and though I worked long, long days, I really enjoyed my first week interning with the Mets. I’m really looking forward to my upcoming weeks of working at the ballpark!